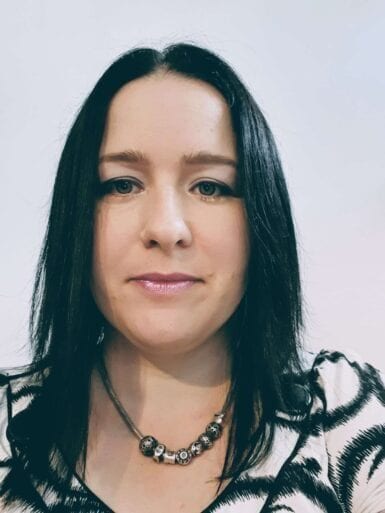 Kirsty’s journey has taken her from general assistant at a large supermarket to landing her dream job as Teaching Assistant in a SEND School.

Kirsty left school with some good GCSE’s at the age of 16. Enrolling on a college course with her local college was the next step for Kirsty. Unfortunately, the course did not meet with her expectations and she decided to leave and seek employment.  Her intention was to return to college the following year.

15 years working for a large supermarket

Kirsty started working for a large supermarket. Earning a wage became a priority and Kirsty found it difficult to leave her employment and return to college.

Over the years Kirsty worked her way up and was promoted to a shift leader.  Returning to work after the birth of her daughter she found the shift patterns difficult and was unable to continue her role as shift leader.  She remained with her employer taking up a position of general assistant.

In January 2019 after 15 years with her employer Kirsty was made redundant. Re employment within the company was not feasible with short contracts and late working hours.

On the Monday following Kirsty redundancy she was at an all-time low.  Saying “I actually cried, I felt quite worthless. At this point my C.V would not impress anyone.  I had done nothing education wise since leaving school”.

But,Kirsty would not give up.  After more than 60 job applications she landed herself a job with an agency as a community carer. She also started volunteering at a local mainstream school her daughter attended.

Finally, Kirsty was able to pursue her passion and go back to college.  She enrolled on to Understanding Children’s and Young Peoples Mental Health.  Delivered by Mode delivery partners Be Well Learning and funded through Liverpool City Region Combined Authority Adult Education Budget.  Kirsty’s adult education journey had begun.

The course ignited Kirsty’s passion to learn as much as she could about children, their mental wellbeing and the effect different aspects of life can have on children.

First assignment with the agency

Kirsty’s plan was to work as a support mentor with children in mainstream school settings. However, her first assignment with an agency sent her on a different path. The assignment took her to a SEND school, throwing her totally out of her comfort zone.

She embraced the challenge, however, she quickly realised her experience in mainstream settings was not comparable.  She did not have the knowledge she needed for the role in a SEND school.

Kirsty was driven to understand the children she was working with in the school and how she could support them.  She was on the waiting list for Understanding Autism course following completion of her previous course.  She contacted Be Well and excitedly waited for the course to start, which she knew would ideally fit in with her new role.

On completion of the course her confidence working with autistic children grew.

Kirsty said “The biggest thing I’ve learnt on the course is all behaviour is communication. I had never thought of it in this way before. Communication really is the key to success for individuals. It is so important to adapt your style to meet the needs of others. Looking at the bigger picture in all situations”

A few weeks into her role, Kirsty had decided this was her place in life, saying “I feel like I am meant to be here, it feels like I belong,”

Completion of her Understanding Autism course has led to her being offered a permanent position at the school.  Kirsty continues to use the Makaton she has learnt to communicate with the children at the school. She has completed 3 levels and is due to start level 4 Makaton shortly.

What next for Kirsty?

Kirsty is keen to carry on learning, she is currently researching in more detail behaviours ADHD, global development delay and selective mutism.

Mode and Be Well have recently been awarded centre accreditation to deliver TQUK Level 2 Certificate in Understanding Behaviour that Challenges. We plan to roll this course out in the near future and look forward to welcoming Kirsty onto the course.

Holly Clark Director at Be Well Learning said “It was an absolute pleasure for Nikki and I to teach Kirsty, her passion and drive to learn is amazing, to be a part of her journey and see her land a permanent position is fantastic. We both wish her the very best in her new career and look forward to welcoming her onto future courses.

If you would like more information on Mode adult learning courses you can call our recruitment team on 0151 709 4640 or e mail recruitment@modetraining.co.uk